Niall Roberge lay in bed after waking from a dream, peace and excitement warring within his body. He'd finally seen them. The men who would own his heart. One man was lithe and blond with sky blue eyes. The other strong of heart, mind and body, with dark green eyes of the forest. For years one of Niall's grandfathers, a full blooded Mohegan, had told him when the time was right, Niall's future would be revealed.

He'd been shown at a very young age that three hearts could live in harmony, and as a child he'd asked Manto, the great spirit of his ancient people, to gift him with such pleasure. However, as time passed slowly. Niall became doubtful. He'd searched in the clubs of his youth and in the galleries of his peers, waiting patiently for the moment when his eyes would connect with another man and he would know he'd found one of his soul mates. With this night's dream, Niall knew two things. First, Manto had heard and granted the request from his youth, and second, the waiting period was over. Niall would soon reach the end of one path in his life's journey and begin another.

Trevor entered the restaurant and looked around for Matt. His eyes landed on a stunningly beautiful man with black hair that flowed around his shoulders and dark fathomless eyes that seemed to be staring right into Trevor's soul. Trevor took a step back, right into a large man behind him. The man cursed and gave Trevor a little push forwards.

He spun around and quickly held up his hands. "I'm sorry. I didn't mean to bump into you."

"Just watch where you're going next time," the man snarled as he led his date up to the bar.

Gee, what a nice guy.

"Asshole," Trevor said under his breath.

He did a one-eighty and found Matt right in front of him. His gaze landed on Matt's lips and Trevor's blood got a little warmer at the memory of their kiss last night. "Hi."

He waved off the rude guy. "Oh sure. Just some local riff raff."

Matt looked over at the bar and his eyes narrowed.

Trevor placed his hand on Matt biceps. "Let it go, Matt. It was nothing. I promise."

"All right." Matt leaned down and whispered in Trevor's ear, "You look very sexy." He placed his hand on the small of Trevor's back. "We have a table over here."

Mat led Trevor into the club. There was a long red tufted bench with cocktail tables efficiently spaced in a row. A single red chair sat on the opposite of the table and pendant lights in a grid across the ceiling emitted an orange glow. Trevor turned his head towards the stage as the nightly jazz band began to play. He loved jazz music. It reminded him of the clubs he saw in all the old movies, where men and women would get dressed up in their best to go out listen to music. Maybe have a dance or two as a saxophone wailed a mournful tune. Trevor let himself get lost in the music for a moment. Matt led him by the hand towards their table, and Trevor trusted Matt to steer him in the right direction.

Before he knew it they'd stopped, and when Trevor opened his eyes, he was standing directly in front of the dark haired warrior he'd laid eyes on when he came into the club. He looked over at Matt in confusion. "Matt?"

"Trevor, this is Niall Roberge." Matt put his arm around Trevor's waist. "Niall, this is Trevor Mitchell."

Trevor held his hand out to Niall. A striking name to go with a striking man. "Hi, nice to meet you." Niall's hand enclosed Trevor's and a shiver ran down the length of his body.

"It's an honour to meet you as well. Please have a seat."

Trevor looked at the seating arrangement and was unsure where to sit. Niall had taken a seat on the bench and there was only one chair. If he sat there then Matt would have to sit next to Niall. Trevor didn't know if he liked that idea. The man was too good looking for comfort, and gave off the air of confidence and maturity more suited to Matt than Trevor considered himself to be. Then again it would be rude to sit next to another man when on a date with Matt. Trevor looked back and forth between the two men, and there was definitely some kind of vibe there. Logan had said the Matt wasn't the cheating type, but evidence pointed to...Oh, wait a minute. Maybe Matt wasn't into cheating so much as he was into sharing.

Trevor sat in the single chair. "So, Matt...wanna tell me what's going on? I have a feeling that my assumptions about this evening were a tad off."

"Not completely. I did invite you out tonight because I felt a special connection between us last night. It may be too late to stop your quick brain to from spinning all sorts of scenarios, but I'm asking you to keep an open mind until all the cards have been laid out on the table." Matt turned to Niall. "I think it may be best for you to tell Trevor a little bit about yourself before we continue."

Niall's eyes met Trevor's across the table. "I met Matt a week ago at the Fenway Health fair. However, it was not the first time I had seen him."

Trevor was confused by Niall's statement. If he only met Matt a week ago then the two were not in a long-term relationship and looking for a playmate.

Niall continued, "From the time I was old enough to understand adult relationships I've searched for the men who would complete my life. I grew up surrounded by the love of my two grandfathers and grandmother who shared their hearts and bed with one another. When the time came for me to begin my search for my soul mates, I knew I wanted to share a similar bond. I am a Mohegan, and while I was raised in a modern home, our tribe is deeply rooted in the traditions of our people. Several weeks ago I had a dream. In this dream were two men." Niall looked at Matt sitting next to him. "Matt is one of those men." He then turned and looked at Trevor. "You are the other."

Trevor saw Matt breathe out a sigh as if he were relieved. He held up his hand to stop Niall from continuing. "So you believe that Matt and I are destined to be yours?"

Niall shook his head. "No. I am yours as much as you will be mine."

"I've participated in menages for most of my sexual life. It started out as a lark in college, then I grew to crave the unique connection between three sexual partners. A few years ago I finally accepted the fact that something deep inside me said that's what it would take for me to be complete. I've tried dating in a more traditional manner, even with men who were not into threesomes, and I was faithful. However, I was always left with a feeling of partial emptiness. Consequently those relationships never lasted long." Matt turned to look at Niall. "When I met Niall, a spark of recognition fired within me. I knew in an instant he would become special to me." He faced Trevor across the table. "The same spark erupted across my skin when we shook hands for the first time."

"And Niall's dream? How do you reconcile that with your beliefs in modern medicine?"

"I don't believe I have to. For a relationship to work, one person's beliefs don't have to be identical to their partner's. What's important is if those people want the same things in life." Matt placed his hand on the table palm up. "I'm willing to try."

Niall placed his hand on top of Matt's, palm up. "I'm willing."

Did he go all in or fold? Trevor knew that if he said no, he would lose Matt. Granted they'd only had half a date and one kiss, but for the first time in what seemed like forever, Trevor had gone to bed with a smile on his face last night. Throughout the day he'd had butterflies in his stomach when he thought about seeing Matt again tonight, maybe even getting another one of Matt's incredible kisses.

He looked across at Niall. The man was undeniably attractive. He knew only the most minor of details about this man, and yet there they sat asking Trevor to commit to a type of relationship he had zero experience in. Trevor'd had his share of one night stands, so while a menage a trios would be more hands, mouths and cocks than he'd ever experienced at once, that didn't hold him back. In fact that sounded pretty damn hot, especially with the two men sitting across from him. No, what had Trevor on the fence was the intensity in their stares and the expectations he sensed in their speech. Niall firmly believed the Trevor and Matt were his destined soul mates and Matt was willing to go along with that belief if it meant he finally found happiness.

So what do I believe?

Trevor stared at the two hands. I was up to him, and it all came down to one thing. 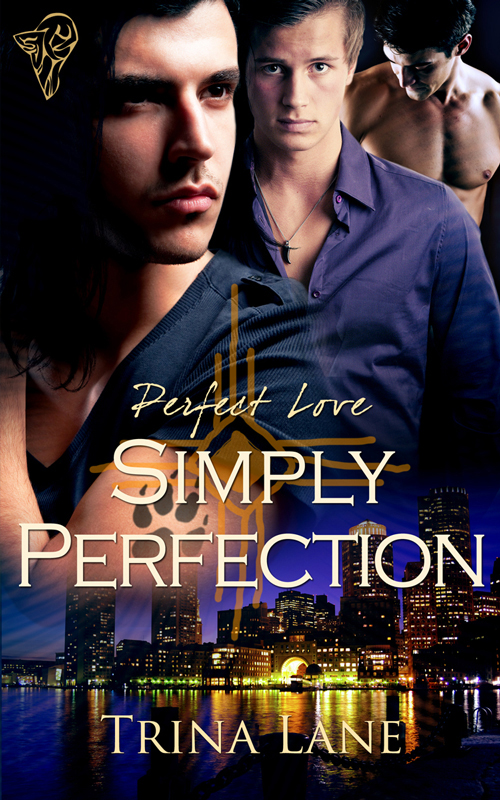